With big wins and expanded partnerships at Walmart, Kroger, and Albertsons under their belt, it is no secret that Microsoft is having a moment in retail.  This moment may last much longer than most.  Retailers are increasingly turning to the cloud to stay competitive, improve the customer experience, and hopefully drive a successful digital transformation.

In many ways, Amazon created the need for retailers to digitally transform and completely alter the way they do business and go to market.  These transformations require significant time and money.  Given how tight margins are within the retail industry, all dollar investments are highly scrutinized.  But are retailers choosing Microsoft’s cloud (Azure, Office 365, Microsoft 365, etc.) by default and failing to get the best cloud deal in the process? 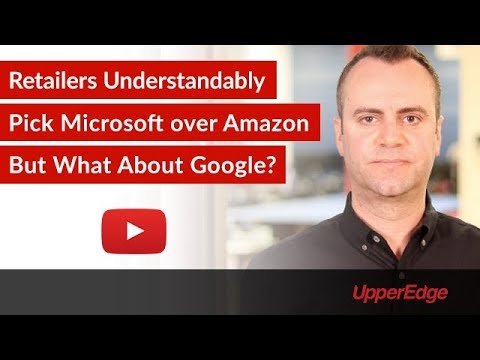 IT executives and procurement departments in the retail industry are intentionally leaving AWS off the table when considering a cloud platform, fearing the idea of heavily relying on Amazon and directly adding to their biggest competitor’s already significantly higher revenue.  Microsoft is capitalizing on these fears and finding great success in the retail industry.  When it comes to cloud platforms, they essentially have a monopoly in retail.

We suspect Microsoft has met little friction when approaching retail prospects with a message along the lines of, “Let’s team up and take down our mutual competitor Amazon.”  While this is understandable, we have to wonder whether retailers are letting their emotions cloud their judgement when it comes to achieving the right deal.

The right deal should include:

Though it may seem Microsoft has the upper hand in this situation, there are opportunities for retailers to create leverage and achieve more favorable terms during a larger renewal discussion or when adding Azure in term.

Google Will Zero in on Retail

Newly appointed Google Cloud CEO, Thomas Kurian, made it clear that Google will invest more in its cloud business and will be more aggressively competing for enterprise wins.  With Amazon out of the picture and Microsoft as the only other real cloud platform option in the retail industry, Google has heavily focused its attention on retailers when looking to expand its Google Cloud Platform (GCP) customer base.  Why focus on other industries where Amazon is the #1 market share holder?  By focusing on the retail industry, Google and Kurian know that there is only one combatant left on the battlefield (Microsoft).

Meanwhile, Google is pushing G Suite as a viable alternative for retailers to consider for their firstline workers.  Google is positioning the fact that many will most likely already have experience with G Suite and therefore can be productively using it quickly, which is always appealing.  Google also knows that Microsoft may have gotten wider spread in knowledge worker adoption, but they still have a chance of getting in the door through firstline workers, mapping to their particular needs and requirements.  We have seen organizations show a willingness to offer both solutions to their employee base.  With two potential access points (GCP and G Suite), retailers should fully expect to be approached by Google’s enterprise sales team if they haven’t already been.

Do not be surprised if Google goes as far as to offer you extended periods of “free” use — especially if you are already a Microsoft Office 365 customer and/or an Azure customer with a good amount of time until your renewal.  Google may be willing to offset the concern (and fees) with having to pay for two solutions until you can actually walk away from Microsoft.  Microsoft may still have an advantage, but the retail industry represents a huge opportunity that Google will not want to miss out on.  This means retailers have more alternatives than they may think.

Even though Microsoft’s cloud solutions could be the best fit for retailers moving forward, it would still serve them well to at least consider GCP as a viable cloud platform and/or Google’s productivity suite, G Suite, as an alternative to the long-standing incumbent Microsoft.

If you are a retail CIO or member of the procurement team, you may not have planned on setting up and managing a competitive environment.  But Google’s investments in cloud and increased focus on enterprises mean that Microsoft may no longer be your only viable option at least not for your entire organization when it comes to G Suite.  Microsoft’s current behavior strongly suggests that they also know this.

When planning for your cloud initiatives or your upcoming Microsoft renewal, ask yourself if it makes sense to give Google an at bat, whether it be for their cloud platform or G Suite. You may discover that Google is the right partner moving forward or you could start the discussion for them to potentially become one further down the line.

At the very least, if it turns out Google is not the best option, you could potentially use the very real competitive environment to negotiate a better deal with Microsoft and an improved go-forward relationship.  Of course, it is simply not enough to introduce Google into the equation.  You still need to make sure there is genuine interest, you do the right things, ask the right questions, and understand what a “good” or “better” deal and go-forward relationship actually looks like.