There has been a renewed demand for outsourcing managed services as the world slowly reopens and companies move to relaunch their IT transformation initiatives.  But the market for Managed Infrastructure Services (MIS) looks different than it did even a few years ago.  Whether you are shopping for a new MIS provider or have an MIS agreement renewal coming up, you should be aware of how the infrastructure services landscape is changing.

The IBM and NewCo Split

On the surface, IBM’s NewCo spin-off strategy makes sense for IBM as they focus their efforts on the rapidly growing hybrid cloud market.  IBM is spinning off its lower-margin managed infrastructure services segment so it can strengthen its high-margin cloud services while simultaneously creating the “world’s leading managed infrastructure services provider” with NewCo.  But even though the market initially reacted favorably to the news, the fact that the split will create even more challenges for an already struggling company cannot be ignored. 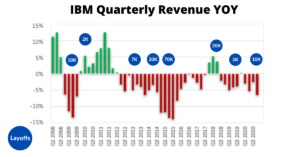 IBM has reported declining quarterly revenue 31 out of 35 quarters dating back to Q2 of 2012.  In this same period, IBM has unsurprisingly announced several “resource actions” or layoffs ranging in scale from 2K to nearly 70K employees in accordance with poor financial performance.  Glassdoor reviews and discussions on websites like layoffs.com, reveal a decline in employee satisfaction, productivity, and loyalty.

Overall, IBM has struggled to maintain an acceptable level of support for its customer base.  Existing customers want more than base support from IBM and have struggled to get IBM to drive innovation within their organization.  IBM keeps saying they are going to innovate and improve efficiencies, but they fail to deliver.  This NewCo split is only going to create more distractions that will further stress NewCo’s ability to deliver base services.  Customers should not expect NewCo to focus on driving innovations in the short- to medium-term (1-3 years).  Only after NewCo has had time to stabilize its own organizational alignment should customers expect to see any improvements to services with innovations and greater efficiencies for customers.

This split with IBM will take NewCo’s focus away from its existing customer base as NewCo will need to focus on forging relationships with other providers and building out its capabilities and offerings to support non-IBM solutions.  In addition, NewCo will be faced with the need to reallocate/shift resources to address additional attrition as not all ex-IBMers will stay through the transition.

Lastly, IBM’s need to work through change management challenges will detract from their ability to give proper attention to leadership and innovation which will likely perpetuate the decline in customer satisfaction.  The split will create more volatility and business disruption.  Both IBM and NewCo will need to build back momentum and pride within their respective organizations.

What This Means for Customers

In general, we expect a decrease in client delivery efficiency from NewCo in the near term as a result of employee turnover, employee dissatisfaction, company downturn, and the impact of management being focused on this NewCo split.  If you have an existing IBM infrastructure agreement that is up for renewal, you need to set a low-bar expectation on what you’ll be able to get if you stay with them.

In short, IBM managed infrastructure customers face uncertainty in the near term and NewCo is becoming more of an uncertain bet.  In today’s world where every dollar matters, companies should be asking themselves, “Is NewCo the right place to invest/re-invest my dollar over the next few years?”

While IBM is going through tumultuous changes, Atos is actively seizing every opportunity to expand its presence and customer base in North America.  The French up-and-comer, who already has a strong position abroad, has not had the same success here in the U.S.  To address this, Atos has been buying up several companies in the past few years in its effort to expand its footprint in North America.  Ten of its 14 most recent acquisitions have been IT services and consulting companies based in the U.S. or Canada, many of which were focused on IT services specifically targeted to healthcare companies. Overall, Atos is growing and has a much different employee dynamic than IBM right now.  With the challenges IBM has faced (and will now face with the NewCo split in motion), IBM customers are starting to wonder what their other options are.  Atos sees this as an opportunity to go after market share.

Atos’s strategy to expand its footprint in the U.S. via acquisitions in North America comes at an opportune time to aggressively compete for market share by going after legacy IBM customers.  We recommend that companies consider at least hearing what Atos has to say as they will most likely be pitching very competitive pricing and support offerings given the circumstances.  While Atos has yet to gain traction and market share in North America, they are hungry.  Speaking with them and listening to their value proposition will certainly give you leverage in your next negotiation if you choose to stay with IBM.

If you’re a current IBM customer who doesn’t feel confident in IBM’s ability to materially impact or improve your infrastructure footprint in the near term and are looking to make an informed decision to switch, you will see that the landscape of infrastructure support options is beginning to change.

While Atos is sure to offer competitive pricing in its effort to expand its footprint in North America, they may still be too much of an up-and-comer for some.  Those who are risk-averse and are looking for stability can stay with, or move to, the more mainstream managed infrastructure services providers such as Accenture, TCS, Infosys, Wipro and HCL.  If you decide to shop around, just be sure to avoid making these common infrastructure outsourcing mistakes.